Apologies. An earlier version of this post went out last night to subscribers in error. Here’s what it should’ve said. ;)

When we left home for our around the world trip, a lot of thought went into what we would/could carry with us. Our committment to having one suitcase each meant that we had to make serious decisions about what could come along for the trip. It was an exercise I’d reccomend anyone take – traveling or not. 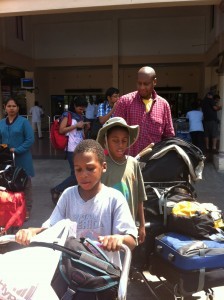 If you had to carry everything you needed with you for a year, how much of it could you live without?

In the end we were surprised at how little we missed on the road. Not once were we sorry we didn’t have another pair of shorts, curling iron or t-shirt. We used everything we brought with us and bought what we needed on the road at a tiny fraction of the price it would’ve cost us at home. (God Bless Cambodia! Long live Thailand! )

But when we got home the surprises continued. More than two months since our trip has ended, we still haven’t completely moved back into “regular life.” We’re trying to build a new normal and make purposeful decisions about what from the old-pre-world-travel life  makes it into the new one.

1. Keeping an extra chest freezer in the basement: I grew up with one of these. It was always full. When we bought our house we got one too. Soon it too was chock full of food. Trips to Costco (and the bills from there) doubled. We had space to fill and we filled it. Often we’d discover food in the freezer in duplicate or triplicate because we’d forgotten it was there. We’d discover buckets of ice cream and meat so freezer burnt no one dared eat it. So we’d have to throw everything out only to start the hoarding all over again. No more. The freezer is going. Buh bye.

2. Living beyond our means: What feels like a lifetime ago I was a lawyer with a six figure salary.  I lived in that world for years and saw salaries climb ridiculously high for partners and associates around me. When I left the law, I left the money. People used to ask me if I missed it and I could honestly reply that I didn’t. What I had realized as a lawyer was that what is a $1 to a person struggling to get by is about $100 to someone with a six-figure income. The struggler may be non-chalant about spending a dollar for a treat on a break, I used to spend a $100 in a trip to Shoppers Drug Mart because I was bored. I’m not proud of it but it’s true. When I left the salary behind I continued to buy things to beat boredom: Mall visits just because, those Costco trips to fill the freezer, 3 instead of one because something was “a deal.” On the road, we had to think differently about money. What we had, had to get us through and when we began to see the real cost of things we were forever changed. Once you’ve bought a cute t-shirt for $2 it’s really hard to justify $35 + HST. We also realised because of how little we lived on – both financially and in our bags – that we had more at home than we needed. Seeing families struggling for food on much less money than we used to buy a shirt only strengthened our resolve. As we try now to sort through it all and only hold on to what we truly want and need, I’m even more glad we’ve left that habit of thoughtless spending behind. 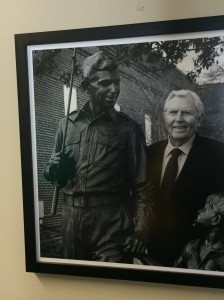 What if conversations meant something? What if we really wanted to learn from each other again?

3. Small Talk: When was the last time you had a meaningful conversation? I’ve found that so much of our time is spent filling time and space with words we don’t mean and questions we really don’t want the answers to –  and devaluing both at the same time. When we were on the road we would speak to people because we genuinely wanted to know them. Maybe we needed help, but more often we just wanted to better understand where we were and what people were like here. Conversations were straight-forward and direct (it had to be in countries where English wasn’t the first language) and the honesty was appreciated. “Where do you come from? Where are you going? Why are you here?” Back home the hardest adjustment has been not calling people out on conversations that really are filler. You don’t really want to talk about the weather do you? Let’s get real.

4. Place fear: At one point during my trip I came across a Facebook post listing 10 of the most dangerous places in the world for travel. The idea behind the list was that these were hot spots that should be avoided at all costs. Someone had forwarded it through the chains to my parents who quickly noted that we had already been to about half and then began having heart attacks when they realized that we were likely heading to several others with their grandchildren in tow. The article’s advice ranged from “If you see a protest in a city square don’t attend” to the ever helpful “stay out of public spaces.”  We need to stop it. There isn’t a country in the world you should be afraid of. Not. One. There are bad people everywhere. There are situations that are dangerous everywhere and should be avoided or approached with caution but ruling out Colombia or Kenya or Egypt  or anywhere else as a whole is as silly as ruling out Vancouver because there was a shooting in Toronto (or ruling out Toronto for that matter). Don’t fall for the headlines. Talk to locals, friends who’ve been and use common sense. 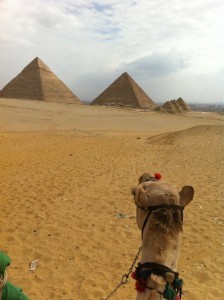 Danger lurking around every corner? I didn’t find it.

5. Celebrity TV: We’ve never been big TV watchers to begin with and traveling for a year meant we saw even less of it. The boys picked up stations as we went that introduced them to new cartoons in languages they didn’t understand but somehow could figure out. Ish and I stuck to downloaded movies, books and music. So the first time I came back into a part of the world where there was Celebrity TV it was jarring.  I know some of you love it so I don’t want to offend but my two cents? We waste way too much time on what Brad and Angelina are doing and how they’re doing it. Case in point? I was traveling through India and read on twitter that Oprah was in town. I mentioned it with excitement to my Udaipur guide. His reply? “Oprah who?” He had never heard of her. I’m not saying you can’t be curious, just suggesting we make sure we aren’t spending so much time watching their lives, that we forget to live ours.

What about you? If you had to go now, what would come with you? What would you find hardest to live without? Is it possible that’s exactly what you need to cut out in your life?