7 Ways to Prepare your Kids for Longterm Travel

If you’ve been thinking about around the world or long term travel with your kids, you’ve likely considered whether your kids are the right age or if it will be too difficult to re integrate them when they’re home. We’ve been there and back. Here’s what we did and what worked well:

1. Ages: When we left home the boys were  6 and almost 8.  They were the right age to carry their own bags and not have to be carried themselves. 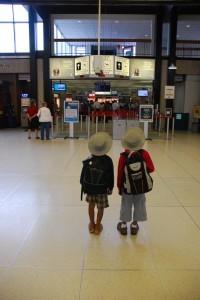 So small when we left…

Throughout the trip Ish and I were impressed with how great they were as travel companions at that age. They didn’t hate us (teen years?) and they had a natural curiosity that added to the trip. If I had it to do again, I’d do it the same way. 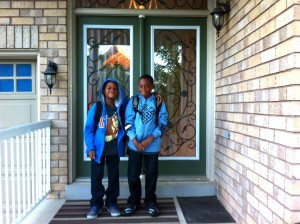 So big when we returned!

There were moments early in the trip when it crossed my mind that if Cam had been 7 it would’ve been even better but since I can’t change the age difference, I’d say this was the best we could do.

2. Technology: My boys were too young for Facebook but before we left we set them up with an email account.  Along the way we added their own Skype account. The Skype account allowed them to keep in touch with friends and grandparents on a separate machine than the one I was using for work. 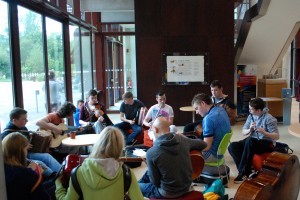 It also meant work colleagues weren’t going to be notified that I was online when in fact it was the boys trying to reach their grampy. The email account also gave them a way to ease the constant leaving of new friends. Email addresses were exchanged and allowed the possibility of preserving the relationship.

3. Timing: We left at the end of a school year and came back in the summer ahead of the next one – it meant that the break was seamless and the re-entry was happening after they’d been home for a couple of months and already reconnected with their closest pals outside of school.

4. School: We have  a really good relationship with their school, principal and teachers. We always tried to volunteer and help out even before we left.  We actually kept in touch with several of the teachers while we were on the road  and sought their input and advice about the level of work and experiences the kids were having. They understand that leaving school for a year wasn’t about abandoning education but about encouraging it.

We found teachers all along the way. The learning never stopped.

5. No Routines: We stuck to our decision to not have the kids on a strict school-like routine while we were traveling. We focused on the basics: math,  reading and writing (by hand and online) throughout the trip. Everything else we felt they were learning just from being out there. Tour guides were the teachers.

6. Summer School:  Once we were home, we enrolled them in a summer camp program that had a 2-hour educational component. For two weeks straight they would have to be somewhere on time,  sit at a desk and listen to a teacher – something they hadn’t done for a year.  Over the two weeks there were no issues but I do think it was good prep for the full school days that were ahead of them in September. We also had them see a tutor once a week to re-introduce them to oral and written French – something we couldn’t help with much while we were on the road.

7. Watching for signs of Stress on Re-integration:  We wondered if they’d find the return to a school routine stressful and watched carefully for signs they were feeling overwhelmed. We haven’t seen many yet. They were a bit tired after their first week but if anything, they are MORE excited about school and learning than ever before. We’ve toned down the traveling a bit for now to give them a chance to readjust but they are truly approaching the school year like they did each of our adventures: No preconceived ideas, happy to be there and excited about what they’re learning.

Are you planning longterm travel with your kids? Have you done it already? Tips you’d add?

You Need a Winter Vacation – Here’s why you’re not taking one.
How to Plan the Best Multigenerational Trip Ever
Wayback Wednesday: National Geographic Travelers of the Year