Most days I wake up happy. What’s not to be happy about? We’re on the trip of a lifetime. We’re meeting new people and exploring new things all the time.

But there are days when I wake up on the wrong side of the bed.

Whatever the cause, it happens from time to time and it happened on the first morning we were in Sydney.

Given the choice I would’ve slept in, rested up  and saved exploring the city for a morning where I wasn’t so grumpy, but the kids weren’t having it.

And it’s all Jo-Anne Wallace’s fault.

Months earlier Jo-Anne – a good friend who has roped me into such activities as getting up at 4 a.m. to go to the gym regularly, running a 5k and then when it was clear I almost died doing it, setting me up to run a 10 k – upped the ante when she sent us some photos during her family’s trip to Sydney a year earlier.

The family – Jo, husband Hugh and kids Tye and Reese – had “buried” a treasure in the nook of a tree and we were supposed to find it.

Hugh, Tye and Reese "burying" our hidden treasure in Sydney

The treasure hunt, though designed with the best intentions, was doomed to fail from the beginning for several reasons.

2. The tree was marked by an “X” made out of twigs

4. It had been over a year since they put it into the tree

But none of that mattered to the kids.  They had the pictures in mind and were determined to find the treasure.

The treasure we were looking for - with our name on it

I pointed out to Jo-Anne at the time that I had high doubts we would find the treasure. How would it survive snow, sleet, sun and critters? What would happen of our marker  “X” ?

She just smiled, ignored my rational observations and insisted. And if you’ve met Jo you know that she can pretty much convince a bear to lay an egg if she puts her mind to it. (Exhibit A: I ran a 10 k.)

And so off we went. Our only clue: “It’s the big tree near the opera house.”

Except if you’ve ever been to the park overlooking the Opera House you’ll know that there are dozens of “big” trees!

Big tree right? It and it's 10,000 brothers overlooking the Opera House were all "big."

The kids did a quick search of each of the trees and while they didn’t find the treasure they did find new friends among the local kids playing. Soon they were climbing over and under the trees supposedly searching for treasure but really just being kids and having a good time.

I, on the other hand, was now fully awake and obsessed. I had to find this treasure and so with Jo, Hugh and all of the Twitterverse on the other end of my iPhone’s Twitter feed I forced them to guide me from tree to tree.

And it was hilarious. When I mentioned I was climbing trees, they barked that I was too high. When I mentioned that there was a furry animal living in one of the holes I’d put my hand into, the giggles began. Pictures were sent back and forth. Other friends on Twitter offered support and condolences. At one point a twitter exchange led to a euphemism so wrong that I collapsed in laughter right there in the park.

About an hour later we found the tree. We even found the hole where the treasure should be but alas it was gone.

As I delivered the bad news over Twitter and bid my friends back home goodnight, I wiped the tears of laughter from my eyes and realized I was smiling. I turned to see my boys laughing and running through the park, climbing the trees and launching fake sword fights with their new friends and it dawned on me that despite our grumpy morning start we were all having a great time.

It wasn’t the treasure we were expecting. It was even better. 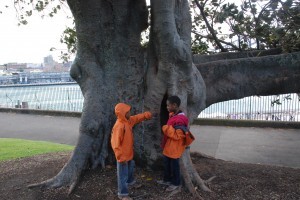 The mistake was assuming the treasure was in the tree.

How to Pack Carry-On Only For A Family Vacation