General, Travel Deals and Other Stuff I Love

Home is where your neighbours are

This is an unusual occurrence for a number of reasons:

1. We are an early to bed/ early rising family unless we’re expecting someone, and

2. We weren’t expecting anyone

When I opened the door, standing on my porch were what can only be described as representatives of some of my street’s ruling families. Standing there, as a group in the dark, I thought how easily they could have been carrying torches and pitch forks to run us out of town.

But no, that wasn’t the case.

They had been talking, they said, and decided they were going to miss us and that we needed to spend time together before we leave. We’ve had dozens of invitations to get together over the last few weeks that we are in town and we’ve had to decline too  many out of a sheer lack of time. Packing and planning is in full force now and I find myself rationing sleep and meals to get things done. 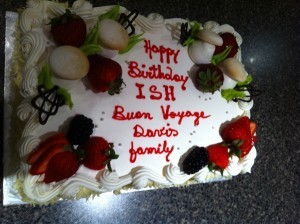 They got us a cake!

But these people were not taking no for an answer.

Did I mention that these are my neighbours? I should’ve added that they are my friends, my street family.

We all moved into this neighbourhood at the same time 7 years ago. I was pregnant with Cameron at the time and E was just a toddler. The family next door is Vietnamese and across the street Guyana, Malaysia and Greece are all represented. They’ve all got kids too. And all the kids have called me “Auntie Heather” since they could speak. They did it when they would toddle over for freezies and they do it now as they zip past me on dirtbikes and skateboards. I love these kids like family and am so proud of the relationships we’ve built here. 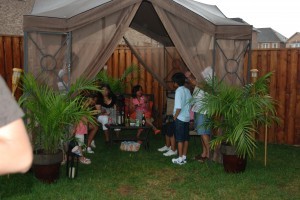 A typical summer gathering with the neighbours

And it’s not just the families that were on my porch that I treasure. It’s my French friends down the street and my Greek friends at the top and the mishmash of cultures and kids in between.

And so while it was completely unexpected, the invitation the families bore to do what we normally do in the summer a little earlier than usual – gather at one of their houses, share a meal and some drinks and catch up – touched me immensely.

And Friday night as we sat laughing, reminiscing, teasing and listening to the kids play with each other the way they have done their entire lives, it struck me again how lucky my family is.

In just over two weeks we’ll walk away from this neighbourhood, that’s not so tough. Saying good bye to my neighbour-friends will be. 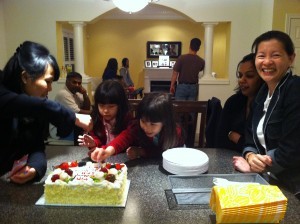 And in that one respect the year can’t pass fast enough.

You Need a Winter Vacation – Here’s why you’re not taking one.
Wayback Wednesday: National Geographic Travelers of the Year