How to take a trip around the world with kids: Step 1 – Dream it

Just the idea of planning a round-the-world trip can be daunting. I know. Eight months until we leave on ours and we’re still forehead – deep in the details.

But even before we knew that we would make this trip a reality we dreamed about doing it.

I’ve always been one of those people who pictured themselves somewhere as soon as a name was mentioned.

Italy? There I was scarfing down pizza.

South Africa? Drinking wine and looking out at Table Mountain.

Thailand? Walking the markets and tasting the pad thai.

Colorado? Zipping down the hills in a hip ski jacket.

It doesn’t even matter that I can’t ski and dislike the cold. You name it. I can see myself there.

The reality of the place was for another time; it is the idea of a place that has always fascinated.

Long before I wrote about travel I did it. With my parents, with my friends, with my husband or on my own.

And once I became a travel writer the lure of a world trip grew. 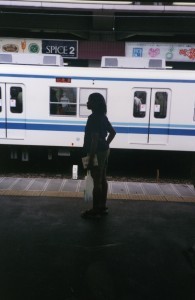 Riding the rails in Japan and dreaming of something bigger

When the dream began there were no children in it. I had visions of traipsing across the globe with Ish. Leaving cities on a whim, spending evenings soaking up the nightlife and mornings sleeping it off.

Over time the dream has adjusted (two kids and a mortgage will do that) but what we’ve refused to do is let it disappear.

Vacations are great and weekend getaways have their place but aren’t you yearning to see more of this big planet? I am.

And so more than ten years after we first talked cautiously about the idea, the stars are aligning in a way to make our trip possible.

Will you be ready when they align for you?

Even if you can’t go tomorrow, there’s nothing stopping you from starting to dream today. The hows, wheres and whens are for later.

You Need a Winter Vacation – Here’s why you’re not taking one.
How to Plan the Best Multigenerational Trip Ever